Volunteering was a big consideration while I was preparing for my six-week Southeast Asia adventure. After all, I was taking the trip to recharge from feeling professionally stagnant and personally over-committed. So I asked colleagues in conservation for their recommendations on environmental nonprofits or wildlife sanctuaries that would be worth visiting or supporting. I also did my own research which included targeted Google searches (“eco-friendly wildlife sanctuaries,” “environmental-reviewed nonprofits,” etc), reading trip reviews, reading organizations’ websites (to gauge whose goals and vision aligned with mine), and then I contacted the ones that looked promising. Based on the feedback I received, I chose two sanctuaries to volunteer at: Free the Bears and the Elephant Valley Project, both conveniently in Cambodia.

The Elephant Valley Project (EVP) is based out of Mondulkiri, Cambodia, roughly a seven-hour bus ride east of Phnom Penh, Cambodia’s capital city. Buses in Cambodia are much like other Southeast Asian countries: drivers move across dirt roads and highways with equal and questionable speed, honking car horns are the norm, and passengers can be piled into vehicle aisles alongside produce, goods, or small livestock.

Once in Mondulkiri, volunteers congregate at the Hefalump Cafe where they’re greeted by an effervescent team before being whisked away by van to Base Camp. A few miles outside of town down some dirt roads, volunteers arrive at the entryway to the Elephant Valley Project and disembark the van to make the rest of the trek by foot. It’s about half a mile downhill to Base Camp, which is a completely off-grid compound in the heart of the jungle. Volunteers may choose to stay in the backpacker dorms or a private bungalow; I chose the bungalow. The accommodations are all “same, same but different” (a common phrase throughout SE Asia…also a phrase that a friend described as a synonym for “similar”): a cozy bed with mosquito net (we’re in malaria country after all), western toilets that you manually flush by pouring water into the toilet bowl, and cold showers that come from a spigot of collected rainwater. Hammocks and wicker furniture pepper the bungalows, dorms, and main lounge of Base Camp – relaxing after a hard day’s work is crucial!

Sunrise at my bungalow

The week begins with an introduction and welcome with the Volunteer Coordinator, who gives the group the weekly outlook on volunteering activities, time with elephants, free time, and food. It was at this introduction, just five minutes after arriving to Base Camp on our first day, that my body decided to get sick. Really sick. I’ll spare you the details, but I’ll say that the Volunteer Coordinator (Connaugh) and the three other volunteers (Sarah, Robbie, and Phil) all quickly jumped into action to help me. Connaugh propped me against a cold wall and called for water and electrolyte powder. I called out for a bucket. After apologizing profusely for getting sick in front of everyone, I joked that I just wanted to break the ice for everybody. The lesson here is that getting sick is often a part of traveling to foreign countries. You can’t plan or expect it. What I later found out was that I was having a reaction to my malaria pills. Compounded by dehydration, my body had reached a breaking point. Fortunately within a few hours, I was back to normal.

A week volunteering at EVP can take on many forms. Connaugh emphasized that every day’s activities were subject to change, depending on weather, organizational needs, and even the elephants’ health or mood. Our week included rebuilding the main path to Base Camp, building a bridge across a small river, uprooting and replanting sapling trees to be later used by the local indigenous tribe in buildings and structures, and harvesting banana trees. These volunteer projects would typically take us from morning until lunchtime, and in the afternoon we would conduct health checks on the elephants at the sanctuary. A health check would be a thorough and hands-on scan of the elephant from trunk to tail. We were trained how to properly conduct a health check early in the week, which was very important in keeping the elephants comfortable and calm. Each elephant receives a health check once a week in addition to daily monitoring by their mahouts, or elephant keepers. 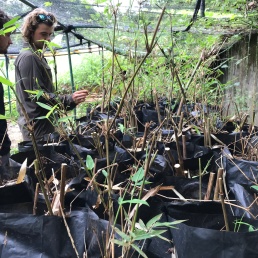 When I visited, there were eight elephants at the sanctuary (since October, two more have been rescued!). All of the elephants have been rescued from exploitation or grueling work environments, and almost all are in their 40s, 50s, or 60s which means they’ve grown accustomed to, and even dependent on, human interaction. This is why each elephant has its own mahout. The mahouts will guide the elephants to food and water, keep them out of danger (or neighboring banana farms!), and even bathe them.  However, at EVP it’s important that these elephants live as close to a “normal” elephant life as possible, so beyond daily interaction with mahouts and once weekly health checks, the elephant-human interaction is kept at a minimum.  In the wild, elephants don’t interact with humans, so that’s why EVP has created a sanctuary where the elephants may roam free and tourists may see the elephants as they would in nature.

To read about some of the elephants’ background stories, and to learn more about why the elephants need mahouts, scroll through my EVP photo album on Facebook.

EVP is a unique wildlife sanctuary because of its work with indigenous people. The goal, to protect elephants, can only be achieved if the forests are protected so the elephants have a place to live. The forests outside of Mondulkiri are lived in and owned by an indigenous tribe known as the Bunong. The forests cannot be protected without the local people. So EVP uses the income earned from tourists and volunteers to provide healthcare, education, scholarships, and more for the Bunong. Additionally, out of a staff of 60 on site, only two are non-native, so EVP is also providing employment. By working with locals, the forests are protected and sustainably managed, which gives resources to the people and a home for rescued elephants. 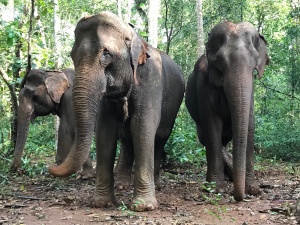 My week with EVP was magical. I learned so much about Asian elephants, Cambodia, and successful wildlife sanctuaries. Since I’ve returned home, I’ve been asked a lot of questions about my experience. Here are some of the most frequently asked questions…

What makes a good elephant (or wildlife) sanctuary? 1. EVP rescues and rehabilitates elephants that were previously overworked, exploited, or abused by humans. This means the elephants can roam free and behave like a wild elephant would. There are no cages and their keepers don’t force them to interact with humans against their will. 2. It supports local people. 3.  A clear mission. Does the sanctuary know what its purpose and goals are? Does it have a long term vision for the future? And does it have a plan for achieving that future? 4. It doesn’t breed elephants for the sake of bringing in more tourists and making money. Instead, its focus is rescuing those that are still out there suffering. 5. It doesn’t offer experiences like bathing in a river with eles or riding them. These are a big NO-NO!

Why shouldn’t humans ride or bathe with elephants? In the wild, elephants bathe in water to cool down and clean themselves. You’ve probably seen videos of wild elephants splashing all around and moving all over the place. It’s actually an integral part of being an elephant! When it comes to bathing with tourists, their forced to suppress those behaviors so that they don’t accidentally hurt a human. Sadly, there are many elephant keepers that inflict pain on the elephant to force them to remain still and “calm.” Plus, imagine having tons of strangers in your personal space, during your personal time, every day for hours. Emotionally it’s uncomfortable and draining for them. They’re very sensitive creatures! With regard to riding them, elephants aren’t actually built to carry heavy loads on their backs. The bulk of their strength is at the front of their bodies so plow through the forests of Asia. When humans ride elephants, even if it’s a 10-minute ride, the elephant is being forced to do that for 10-12 hours per day. As such a huge animal, elephants needs to be eating 10-12 hours a day, so this kind of exploitation makes for grueling and unfair conditions.

What was it like touching an elephant? Surreal. I didn’t know what to expect, I assumed the skin would be rough and hard, but it was so fuzzy. Two other volunteers said they wished they had gotten my reaction on camera because my face expressed pure joy.

Have more questions? Post in the comments below! Otherwise, check out my photo album on Facebook for detailed captions on every photo to learn more.

And check out my short promotional video on EVP below: